This post was originally published on Toptal.com by  SCOTT RITTER – SENIOR SUPERVISOR @TOPTAL

You meet your friend Jeff for lunch. Jeff’s been managing the development of a new product and it’s about to be released. He’s pumped.

But the product release isn’t the main thing that’s got Jeff so excited. Instead, Jeff can’t stop raving about his new hire, Luis.

Jeff says Luis is the best software engineer, he’s ever had on his team. Luis doesn’t just hit targets, others can’t, he creates and hits targets others don’t even see. He’s virtually always available, always accountable, and brings more to the table than anyone Jeff’s ever worked with. And Luis just ‘get’s it’.

As Jeff goes on, you’re blown away. But you’re really only half listening at this point, as you picture what it would be like to have someone like Luis on your own team…

But then, suddenly, Jeff says something that shatters the idyllic picture in your mind:

“And get this”, Jeff adds as he leans forward, “Luis is remote”.

What? Remote? How can that be? Everyone knows that hiring remote software developers is fraught with challenges. It’s hard enough if they’re relatively local. It’s even tougher if they’re remote. And it can be nothing short of a disaster if they’re overseas. Luis can’t possibly be that good.

Sorry dude. Your stereotypes have just been shattered.

Wow. You don’t know what to think.

In fairness, the remote employment stereotypes you’ve had in your mind until now, aren’t entirely unfounded, especially when it comes to offshore workers. Recent years have seen an increasing flood of cutthroat overseas development shops promise extremely inexpensive services and then fail to deliver by even the most basic of professional standards. With so many negative experiences, a growing stigma has developed that all offshore workers are low quality, undependable, and unable to communicate effectively.

To be sure, there certainly are pitfalls to be aware of and to avoid when hiring remote workers, especially overseas. But if the negative stereotype of remote hiring were as across-the-board-true as some would have you believe, then how does one explain the dramatic 80% increase in the remote workforce from 2005 to 2012? The simple fact is that working and hiring remotely is a growing and increasingly successful paradigm.

Case in point:  GitHub. GitHub hosts over 10 million code repositories and recently received $100 million in Series A funding. Not too shabby. And guess what?  Over two-thirds of their employees are remote, distributed all across the globe. Seems safe to assume that the remote employment model is working really well for them.

And then there’s Dell – the IT mega-vendor with annual revenues that were in excess of $62 billion in 2012. Dell must be highly confident in the viability of remote work as part of their core business model as well, having recently announced a goal of having half of its employees work remotely within 6 years (by 2020).

Clearly, there must be more to hiring software engineers and working remotely than traditional stereotypes would lead one to believe. In truth, when employed properly and intelligently, a staffing strategy that incorporates remote team members can be a huge win for everyone involved. Some of the best talent in the world telecommutes and, whether we want to admit it or not, a growing percentage of that talent is overseas.

With that in mind, this post pulls the rug out from under 5 of the most prevalent myths about remote workers, with a specific focus on software developers. 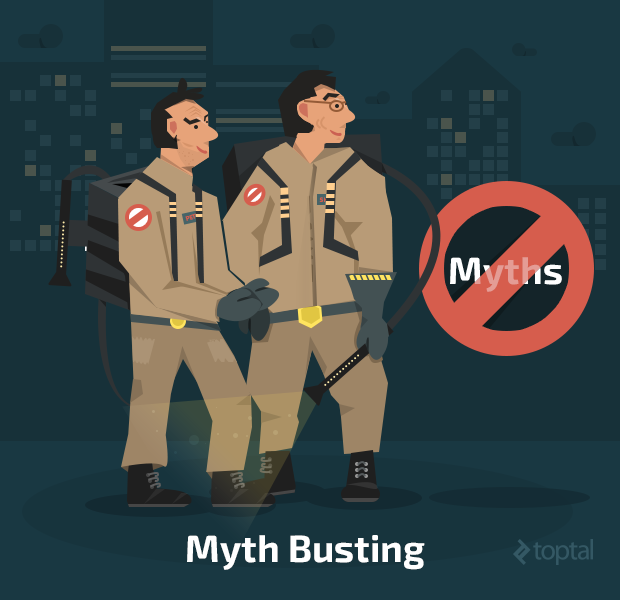 Many growing companies and startups are realizing that the very best developers may not be located within commuting distance of their offices. Even if they are, their rates may be ridiculously disproportionate to their skill levels. A local hire in no way guarantees a wise investment.

A key problem with hiring overseas team members is that most employers go about the process of selecting and hiring these remote workers entirely wrong. When most employers turn their sights to hiring overseas, they make the penny-wise-and-pound-foolish decision to exploit the differential in labor costs to its fullest and hire the cheapest labor they can find. Some even fool themselves into thinking they’ve avoided this trap by hiring a not-quite-as-cheap software developer, but they still rarely find in the long run that their time or money was well spent.

When hiring a remote worker, the primary focus (as with any hiring) needs to remain on quality. Any cost savings that result should merely be viewed as an added bonus. Decisions in life that are solely based on economics rarely prove to be wise ones, and the same most certainly holds true for hiring remote software engineers.

Employ the best, not the cheapest, and you’ll be the beneficiary of remote team members who are nothing short of stellar.

Ever worked with anyone from the U.S. who was fired for underperforming? I would venture to say that we all have. There are great and terrible developers in Atlanta, Chicago, and New York, just as there are in Argentina, Portugal, and Hungary. Quality is not a deterministic function based on geographic location.

And not anything against the good ’ole USA but we actually ranked 30th worldwide (out of 65 countries tested) for math in 2012, and that’s down from a ranking of 25th worldwide in 2009. Not a good sign. And this is particularly significant with regard to hiring software developers, since algorithmic aptitude can often be an essential underpinning to effective software engineering. Don’t get me wrong, we have some of the very best developers here in the U.S., but to say that top developers from other countries are not as good as those in the U.S. would simply not be true. Top developers are who they are because they stay up-to-date on leading-edge technology and because of their commitment to technical excellence, not because of where they are located geographically.

MYTH #3: Differences in culture, language, and time zone are serious problems.
REALITY: They can be, which is why it’s so important to hire wisely.

Yes, the potential for cultural, language, and time zone challenges do exist when hiring a remote web developer or software engineer, but they can certainly be surmounted through a highly exacting recruiting process that centers around an uncompromising commitment to excellence.

Hyam Singer’s post In Search of the Elite Few discusses a methodology for finding and hiring the best software engineers in the industry. That approach is no less applicable to remote or overseas candidates than it is to those who are local.

So with that in mind, let’s examine the cultural, language, and time zone challenges of remote hiring in more detail:

MYTH #4: Remote developers won’t integrate well with your team.
REALITY: If they’re good, they’ll bend over backwards to prove themselves to be stellar team players.

A sharp developer is not only sharp technically, but is also socially and professionally astute, and is therefore well aware of the reservations and skepticism that you may have.

For these reasons, a high-caliber remote developer will often work that much harder to gain your trust and respect. Show her that trust, grant her that respect, and you’ll have more than a team player, you’ll have someone who’s unflinchingly loyal and committed to the success of your project.

MYTH #5: Qualified remote software developers are next to impossible to find.
REALITY: Not if you know where and how (and where and how not!) to look for them.

Well, if you get an unsolicited email from a company touting offshore resources, and it contains a whole slew of grammatical and typographical errors, that’s probably a pretty good indicator of a source that you don’twant to turn to for offshore hires. Remember, we’re looking for quality.

The challenge, whether domestically or abroad, is to navigate through the masses to identify the elite few. International high-end developer networks are emerging as a highly effective means of finding and tapping into these valuable resources across the globe. Indeed, great developers tend to gravitate toward great developers, wherever they may be.  And that’s a fact.

This post was originally published on Toptal.com by  SCOTT RITTER – SENIOR SUPERVISOR @TOPTAL