This post was originally published on Toptal.com BY NERMIN HAJDARBEGOVIC – TECHNICAL EDITOR @ TOPTAL. Click here to read. Republished with permission.

Before I proceed, let me make it absolutely clear that I have nothing against crowdfunding. I believe the basic principle behind crowdfunding is sound, and, in a perfect world, it would boost innovation and provide talented, creative people with an opportunity to turn their dreams into reality.

Unfortunately, we live in the real world, and therefore it’s time for a reality check:

While most entrepreneurs may feel this mess does not concern them because they don’t dabble in crowdfunding, it could have a negative impact on countless people who are not directly exposed to it:

Indeed, but I am not here to talk about the good stuff, and here is why: For every Oculus Rift, there are literally hundreds of utterly asinine ideas vying for crowd-cash.

Unfortunately, people tend to focus on positive examples and overlook everything else. The sad truth is that Oculus Rift is a bad example of crowdfunding, because it’s essentially an exception to the rule. The majority of crowdfunding drives doesn’t succeed.

How did a sound, altruistic concept of democratizing entrepreneurship become synonymous with failure? I could list a few factors:

The press should be doing a better job. Major news organizations consistently fail to recognize impossible ideas, indicating they are incapable of professional, critical news coverage. Many are megaphones for anyone who walks through the door with click bait.

The press problem is made exponentially worse by social networks, which allow ideas to spread like wildfire. People think outlandish ideas are legitimate because they are covered by huge news outlets, so they share them, assuming the media fact-checked everything.

Once it becomes obvious that a certain crowdfunding initiative is not going to succeed, crowdfunding platforms are supposed to pull the plug. Sadly, they are often slow to react.

Realistic Expectations: Are You As Good As Oculus Rift?

Are you familiar with the “Why aren’t we funding this?” meme? Sometimes the meme depicts awesome ideas, sometimes it shows ideas that are “out there” but entertaining nonetheless. The meme could be applied to many crowdfunding campaigns with a twist:

”Why are we funding this?”

This is what I love about crowdfunding. Say you enjoyed some classic games on your NES or Commodore in the eighties. Fast forward three decades and some of these games have a cult following, but the market is too small to get publishers interested. Why not use crowdfunding to connect fans around the globe and launch a campaign to port classic games to new platforms?

You can probably see where I’m going with this: Crowdfunding is a great way of tapping a broad community in all corners of the world, allowing niche products and services to get funded. It’s all about expanding niche markets, increasing the viability of projects with limited mainstream appeal.

When you see a crowdfunding campaign promising to disrupt a mainstream market, that should be a red flag. 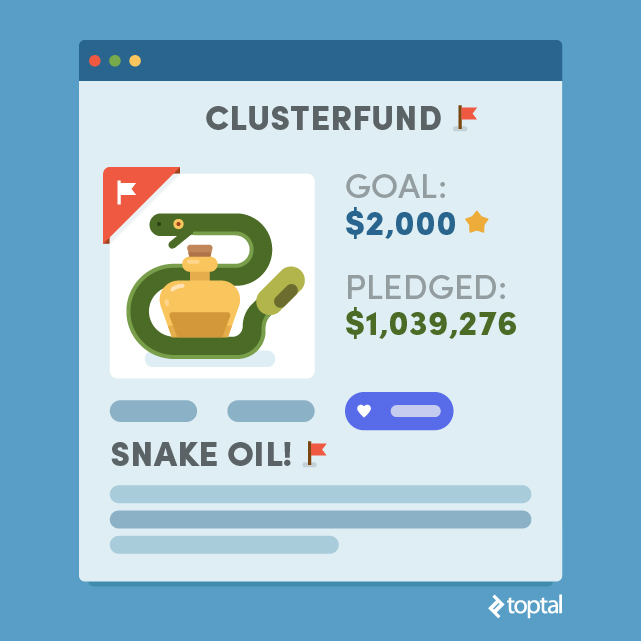 Why? Because you don’t need crowdfunding if you have a truly awesome idea and business plan with a lot of mainstream market appeal. You simply need to reach out to a few potential investors and watch the money roll in.

I decided against using failed software-related projects to illustrate my point:

Most people are not familiar with the inner workings of software development, and can’t be blamed for not understanding the process.
My examples should illustrate hype, and they’re entertaining.

Triton Artificial Gill: How Not To Do Crowdfunding

The Triton artificial gill is essentially a fantasy straight out of Bond movies. It’s supposed to allow humans to “breathe” underwater by harvesting oxygen from water. It supposedly accomplishes this using insanely efficient filters with “fine threads and holes, smaller than water molecules” and is powered by a “micro battery” that’s 30 times more powerful than standard batteries, and charges 1,000 times faster.

Sci-Tech Red Flag: Hang on. If you have such battery technology, what the hell do you need crowdfunding for?! Samsung, Apple, Sony, Tesla, Toyota and just about everyone else would be lining up to buy it, turning you into a multi-billionaire overnight.

Let’s sum up the claims:

Given all the outlandish claims, you’d expect this sort of idea to be exposed for what it is within days. Unfortunately, it was treated as a legitimate project by many media organizations. It spread to social media and eventually raised nearly $900,000 on Indiegogo in a matter of weeks.

Luckily, they had to refund their backers.

This idea doesn’t sound as bogus as the Triton, because it’s technically possible. Unfortunately, this is a very inefficient way of generating water. A lot of energy is needed to create the necessary temperature differential and cycle enough air to fill up a bottle of water. If you have a dehumidifier or AC unit in your home, you know something about this. Given the amount of energy needed to extract a sufficient amount of water from the air, and the size of the Fontus, it might produce enough water to keep a hamster alive, but not a human.

While this idea isn’t as obviously impossible as the Triton, I find it even worse, because it’s still alive and the Indiegogo campaign has already raised about $350,000. What I find even more disturbing is the fact that the campaign was covered by big and reputable news organizations, including Time, Huff Post, The Verge, Mashable, Engadget and so on. You know, the people who should be informing us.

I have a strange feeling the people of California, Mexico, Israel, Saudi Arabia and every other hot, arid corner of the globe are not idiots, which is why they don’t get their water out of thin air. They employ other technologies to solve the problem.

Mainstream Appeal Red Flag: If someone actually developed a technology that could extract water from air with such incredible efficiency, why on Earth would they need crowdfunding? I can’t even think of a commodity with more mainstream appeal than water. Governments around the globe would be keen to invest tens of billions in their solution, bringing abundant distilled water to billions of people with limited access to safe drinking water.

NASA referred to the ill-fated Apollo 13 mission as a “successful failure” because it never executed a lunar landing, but managed to overcome near-catastrophic technical challenges and return the crew to Earth.

The same could be said of some tech crowdfunding campaigns, like the Ouya Android gaming console, Ubuntu Edge smartphone, and the Kreyos Meteor smartwatch. These campaigns illustrate the difficulty of executing a software/hardware product launch in the real world.

All three were quite attractive, albeit for different reasons:

What went wrong with these projects?

These examples should illustrate that even promising ideas run into insurmountable difficulties. They got plenty of attention and money, they were sound concepts, but they didn’t pan out. They were not scams, but they failed.

Even industry leaders make missteps, so we cannot hold crowdfunded startups to a higher standard. Here’s the difference: If a new Microsoft technology turns out to be a dud, or if Samsung rolls out a subpar phone, these failures won’t take the company down with them. Big businesses can afford to take a hit and keep going.

There is no single reason that would explain all crowdfunding failures, and I hope my examples demonstrate this.

Some failures are obvious scams, and they confirm we need more regulation. Others are bad ideas backed by good marketing, while some are genuinely good ideas that may or may not succeed, just like any other product. Even sound ideas executed by good people can fail. 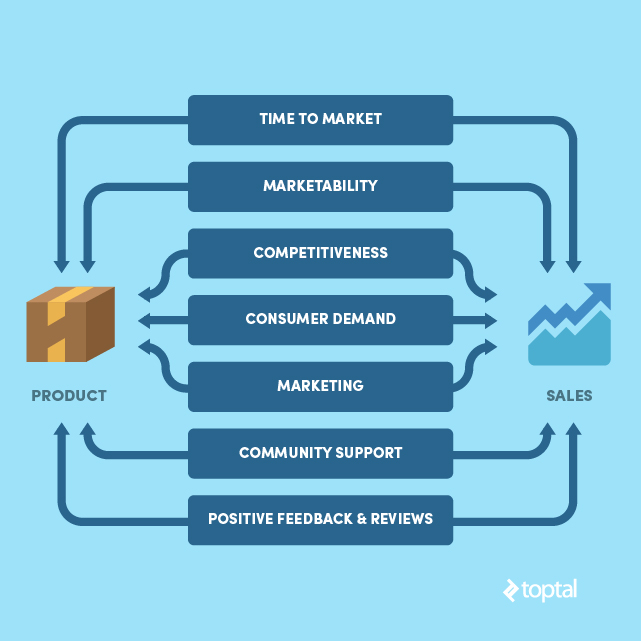 Does this mean we should forget about crowdfunding? No, but first we have to accept the fact that crowdfunding isn’t for everyone, that it’s not a good choice for every project, and that something is very wrong with crowdfunding today:

Unfortunately, some crowdfunding platforms don’t appear eager to scrutinize dodgy campaigns before they raise heaps of money. This is another problem with crowdfunding today: Everyone wants a sweet slice of the crowdfunded pie, but nobody wants a single crumb of responsibility.

That’s why I’m no optimist; I think we will keep seeing spectacular crowdfunding failures in the future.

Why Nobody Cares About Your Great Idea

“I have an awesome idea for an app that will disrupt…”

“Wait. Do you have competent designers, developers, funding?”

“So what you meant to say is that you have nothing?”

This admittedly corny joke illustrates another problem: On their own, ideas are worthless. However, ideas backed up by hard work, research, and a team of competent people are what keeps the industry going.

Investors don’t care about your awesome idea and never will. Once you start executing your idea and get as far as you can on your own, people may take notice. Investors want to see dedication and confidence. They want to see the prototypes, specs, business plans, research; not overproduced videos and promises. If an individual is unwilling or incapable of making the first steps on their own, if they can’t prove they believe in their vision and have the know-how to turn it into reality, then no amount of funding is going to help.

Why not grant the same courtesy to crowdfunding backers?

This post was originally published on Toptal.com BY NERMIN HAJDARBEGOVIC – TECHNICAL EDITOR @ TOPTAL. Click here to read. Republished with permission.